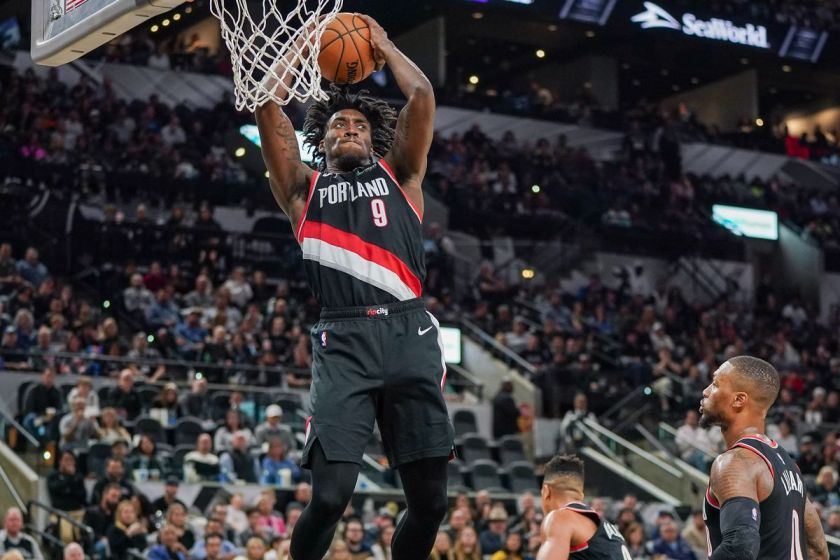 The Portland Trail Blazers have had their big three of Damian Lillard, CJ McCollum, and Jusuf Nurkic. But the one thing they’ve been missing (since the LaMarcus Aldridge, Wesley Matthews, and Nicolas Batum days), is a wing that can provide offense for the team when Lillard and McCollum are being shutdown. The Blazers wings this season have helped a ton, but they are not primary ball handlers. When teams start double-teaming Lillard and McCollum, this becomes an issue.

The Blazers are missing a starting Small Forward that can take control of the game when the team needs him to. A few years ago, they had Maurice Harkless, he was good and everything but he wasn’t going to put up big numbers offensively. You then had Al-Farouq Aminu, its the same thing with Harkless. Last season, you had Kent Bazemore, Rodney Hood, and Trevor Ariza. Bazemore never turned into what the Blazers were hoping for him to be so they traded him for Ariza. Hood last year was in a groove before he got hurt. But that’s where Ariza had come in, and the Blazers were starting to play well with him in the line-up before the shutdown. Then he didn’t play in the bubble.

But the player that we have forgotten about since the bubble has really been Nassir Little. Well, that is until he had that 30 point game in a loss to the Milwaukee Bucks. Yes, it was a loss, but this goes to show that he can score. Now, some fans will say Carmelo Anthony should be the starter. But, the problem with that is against starting units, he can only be a spot-up three point shooter. As much as it hurts to admit, Melo isn’t quick enough to get by starting threes today in the NBA.

The Blazers have their starting small forward right now in Norman Powell. But what if Powell doesn’t re-sign?

If he doesn’t or if the coach decides to move him to the bench… Nassir Little should be the starting small forward.

Now, when it comes to the roster, Little is listed as Power Forward. But, he’s also listed at 6-5, 220. On the plus side, has a 7-2 wingspan. Over the past couple of weeks, we have seen Little’s minutes ramp up. More recently, the Blazers have had to put him at either shooting guard or small forward. For the past week, he has been playing at the guard spot.

““It was a defensive decision,” Stotts said. “He has length and athleticism to guard perimeter players and he’s shown he can make shots and space the floor. It was something that I thought we should try.”

Stotts says it won’t be the last time that Little takes the court as a shooting guard.

“We’ll be doing it again,” Stotts said. “He still has to learn some of the tricks of the trade as far as guarding perimeter players — coming off pin downs, guarding pick and rolls — but I think he is capable of doing that and we have to continue to see how he does in that role.””

You can find more on that here.

So Little can pretty much guard the one down to the four. The five would be pushing it, but with his wingspan, he might be able to. But, according to Stotts, Little has earned minutes and he will continue to get those minutes.

Nassir Little doesn’t get all that much playing time, but when he does he makes the most of it. This season, there is a big difference from the Nas we saw last year. If you take a look at the shooting numbers, Little has improved by a big margin. His field goal percentage has improved across the board this season, compared to last year.

Here is a look at the field goal percentage by distance for Nassir Little:

Little has almost doubled the amount of three-pointers he has made, and he has only taken 9 more than last season (as of 4/12/2021).

Now, you’d still have three guys 6-5 and under from the one to the three but a 7-2 wingspan at the small forward position should not be underestimated.

The biggest problem right now would be, you have not seen Lillard, McCollum, Little, Covington and Nurkic (this is what the lineup would look like) on the court together.

He was drafted by the Blazers in the first round of the 2019 NBA Draft. He was the 25th pick. He actually played a big role for the Blazers last season due to injuries, up until the bubble. Then he got a concussion and was dehydrated. Earlier this season, it appears he had Covid (one blazer player did, and he was the only one not with the team for the first two weeks). He has team options in his contract for the next two season, which the Blazers will more than likely pick up because of how well he is playing this season. He was a 2017-18 McDonalds All- American, and in college he averaged 10 points and 5 rebounds in his one year at the University of North Carolina.

Now, obviously it will all come down to the coaching staff on who they decide to start in the upcoming seasons. But if Little continues to play the way he has been, he may force their hand. With his athleticism, versatility and wing span, he might be what the Blazers need in their starting unit.